Kathmandu, Nepal – They adorned the walls of an ancient palace, rested against old stone water spouts, and hung scattered through narrow alleyways across the ancient city of Patan – images that convey feelings of nostalgia and hope, joy and history.

A map to the exhibition, which ended on November 9, guided people through the city, as though they were on a magical adventure, unsure what they would see next and which feelings it would evoke.

The festival came towards the end of a challenging year for the Nepalese people. First, there was the massive earthquake that took thousands of lives. Then there was the socioeconomic and political instability resulting from the release of the long-awaited constitution.

“We started thinking about and preparing for the festival in February,” explained Photo Kathmandu’s codirector,Nayantara Gurung Kakshapati. “But after the April earthquake, everything was put on hold”

“[Then], after a few months, we decided this would be a perfect way to bring the attention back to Nepal, displaying to the world our ability to adapt positively to the challenges facing our country.”

The festival has already contributed $12,000 to help rebuild an old Pati, a traditional rest stop, in a town called Chyasal, which was destroyed in the April 25 earthquake.

“I just stand by my exhibition and watch thousands of people passing by my work, and when they are drawn in by the photos, it makes me feel really fortunate to be able to give my work back to Nepal,” explained Kevin Bubriski, who has been taking photos of Nepal since 1975 and whose work was on display in Patan.

In addition to the exhibition, there were workshops, talks by artists, and slide shows of various artists’ work in different locations around the city.

Internationally acclaimed photographers, including Tanzim Wahab, Surendra Lawoti, Sohrab Hura and Philip Blenkinsop, reviewed the portfolios of emerging artists. Also present was Soren Pagter, the head of the world-renowned Photojournalism Department at the Danish School of Media and Journalism, and Thomas Borberg, the photo editor-in-chief of Politiken, one of the largest newspapers in Denmark.

“It’s not photography for photographers, it’s photography meant for developing the consciousness of the people,” said Pagter. “All of a sudden, it’s not about photography – it’s about democracy, it’s about information, it’s about gaining knowledge on your society … and this you do by putting your work out into the street.”

The festival has allowed the international and local community to communicate – connecting two different worlds through the powerful medium of photography. 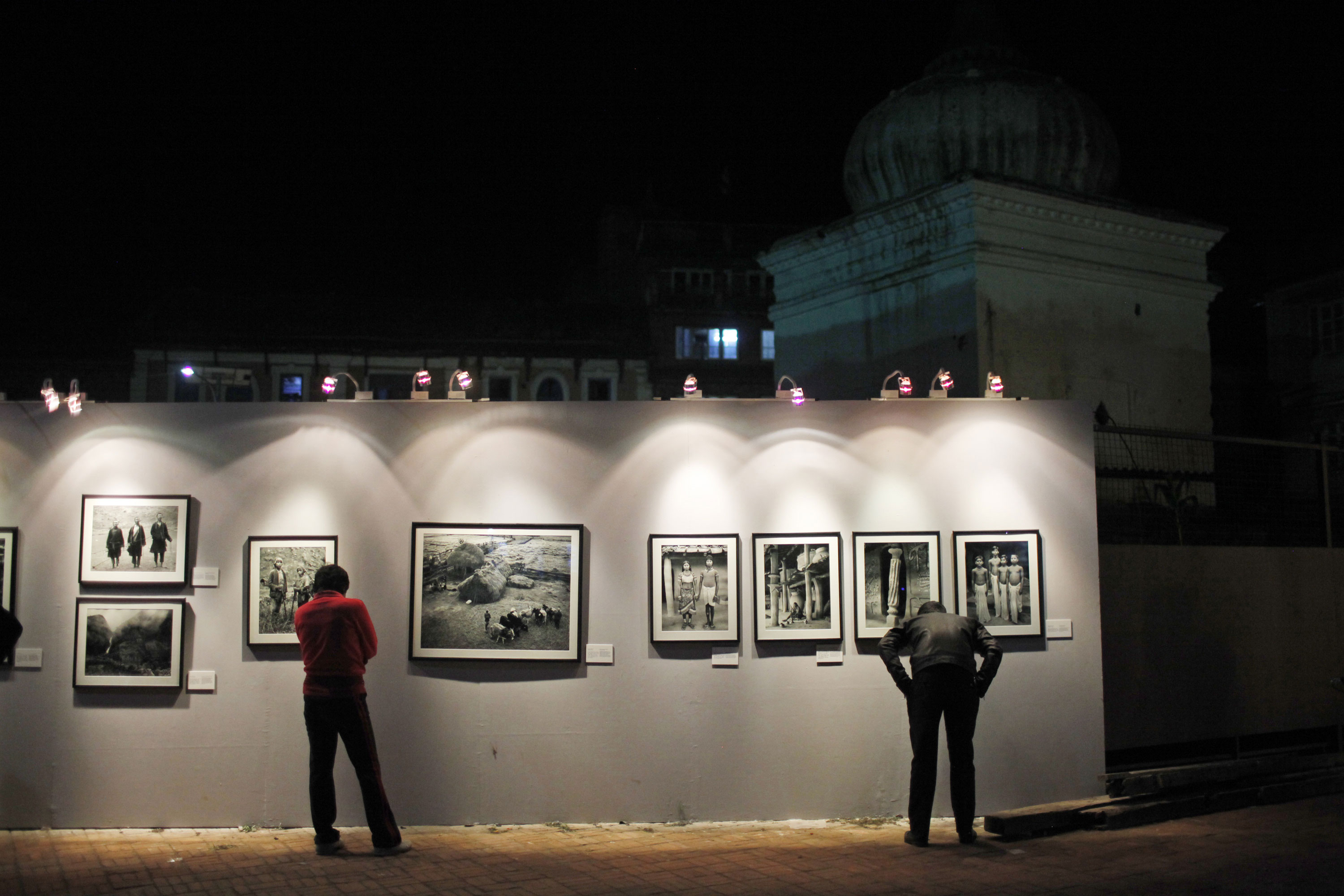 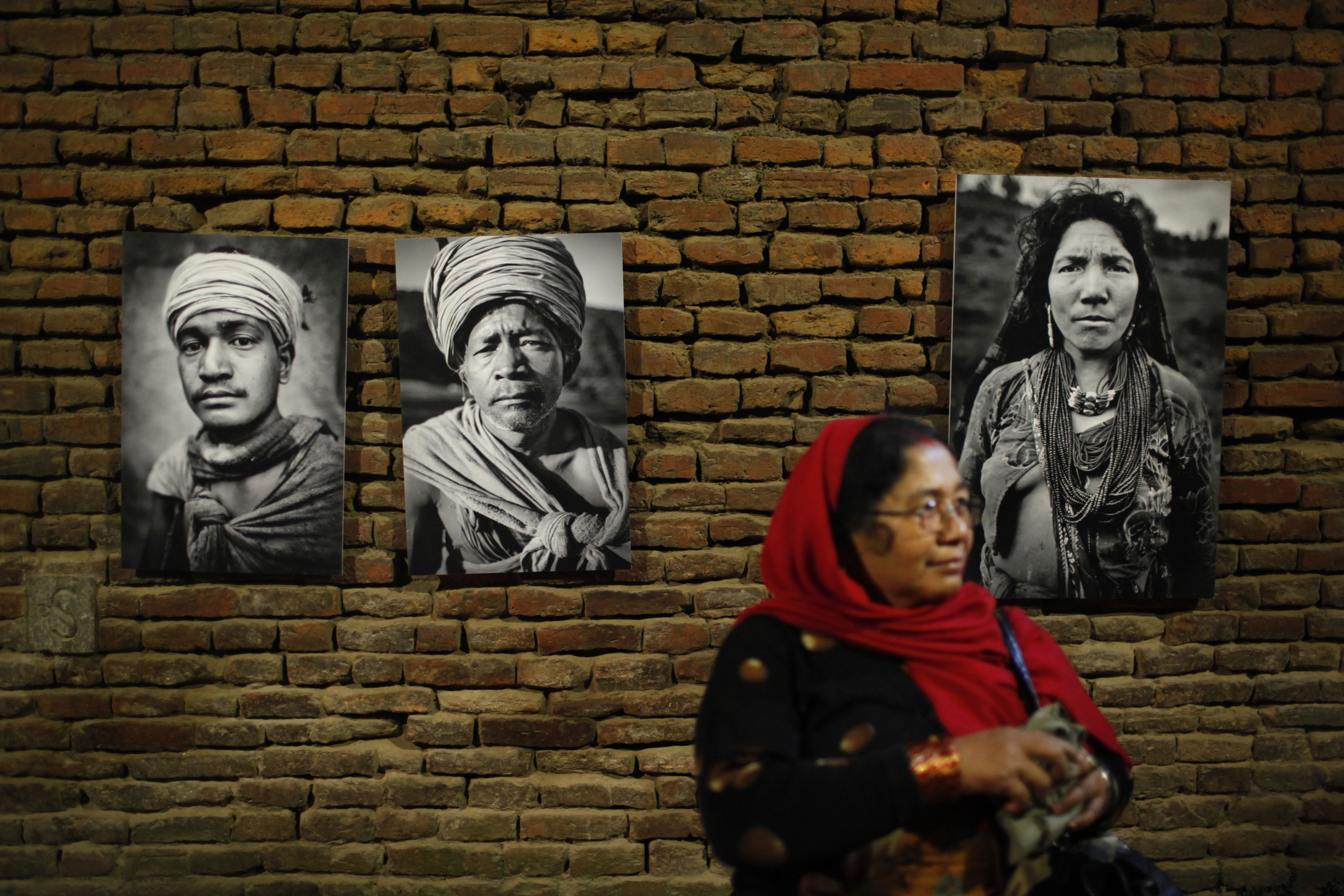 The exhibits were set up alongside damaged, but spectacular temples and palaces. [Niranjan Shrestha/Al Jazeera] 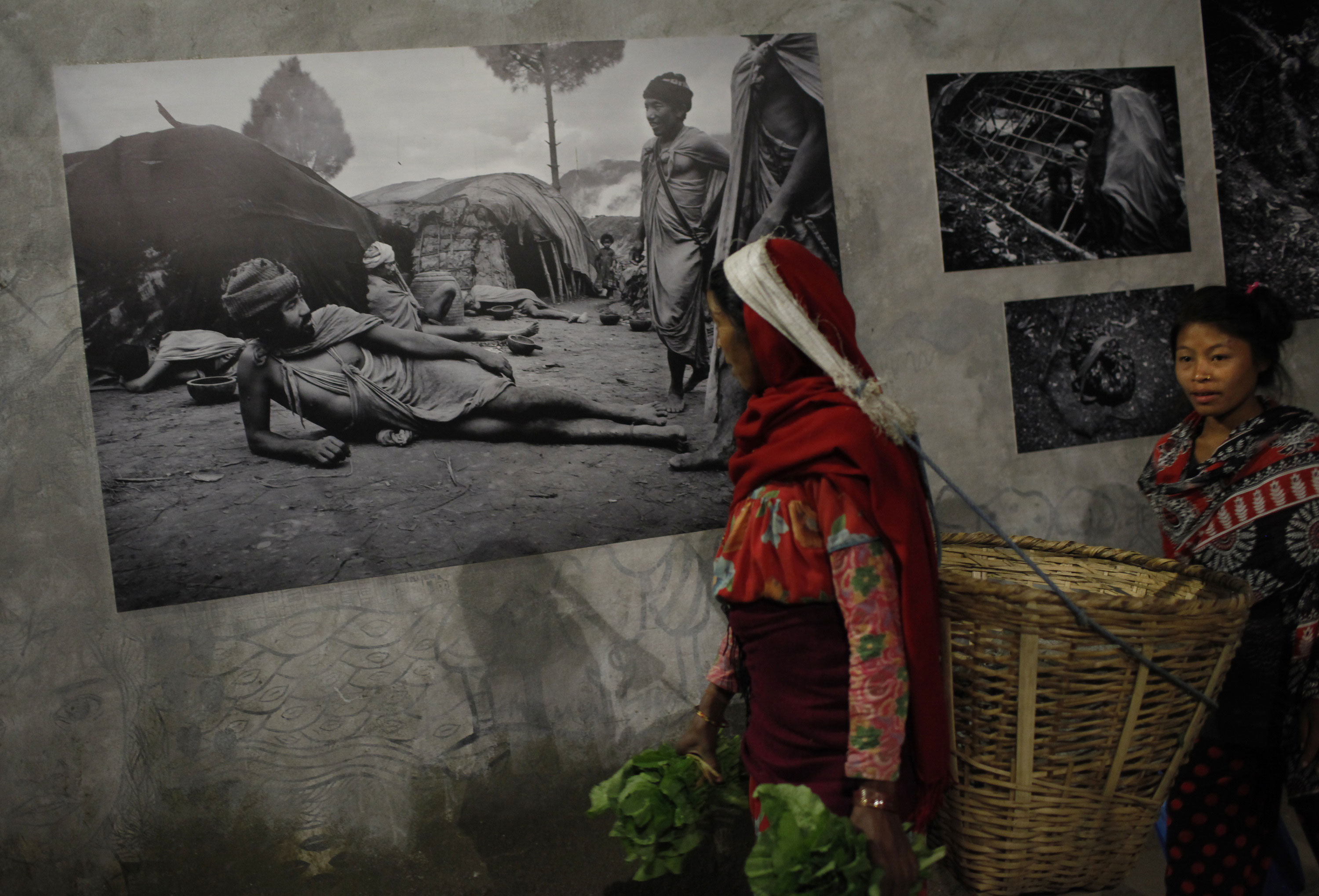 Known as Photo Kathmandu, the festival takes visitors on a tour of the historic city of Patan. [Niranjan Shrestha/Al Jazeera] 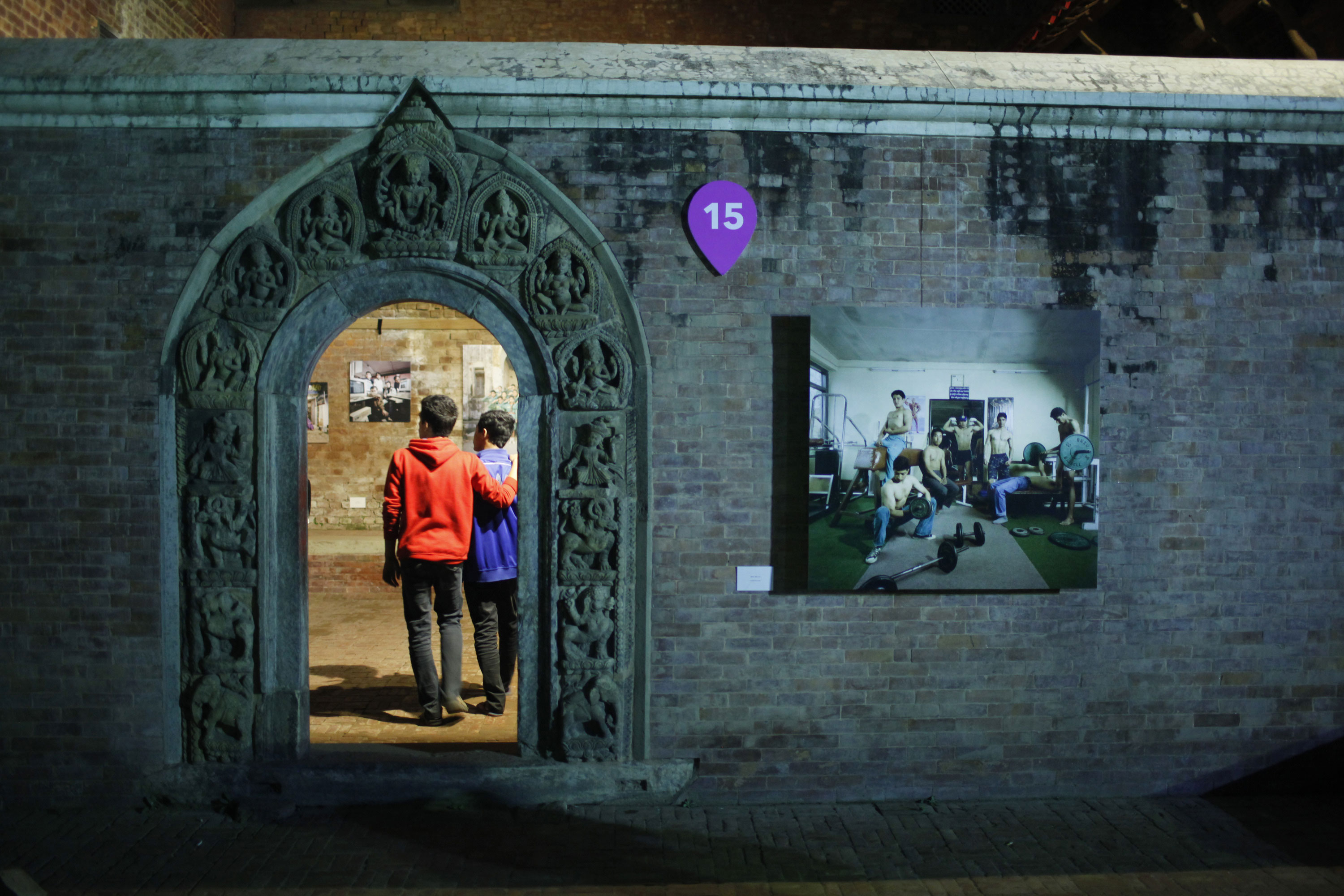 The curated walks and exhibitions, featuring the work of Nepalese and international photographers, are all free, while proceeds from the sale of selected prints will go towards rebuilding Patan’s architectural heritage. [Niranjan Shrestha/Al Jazeera] 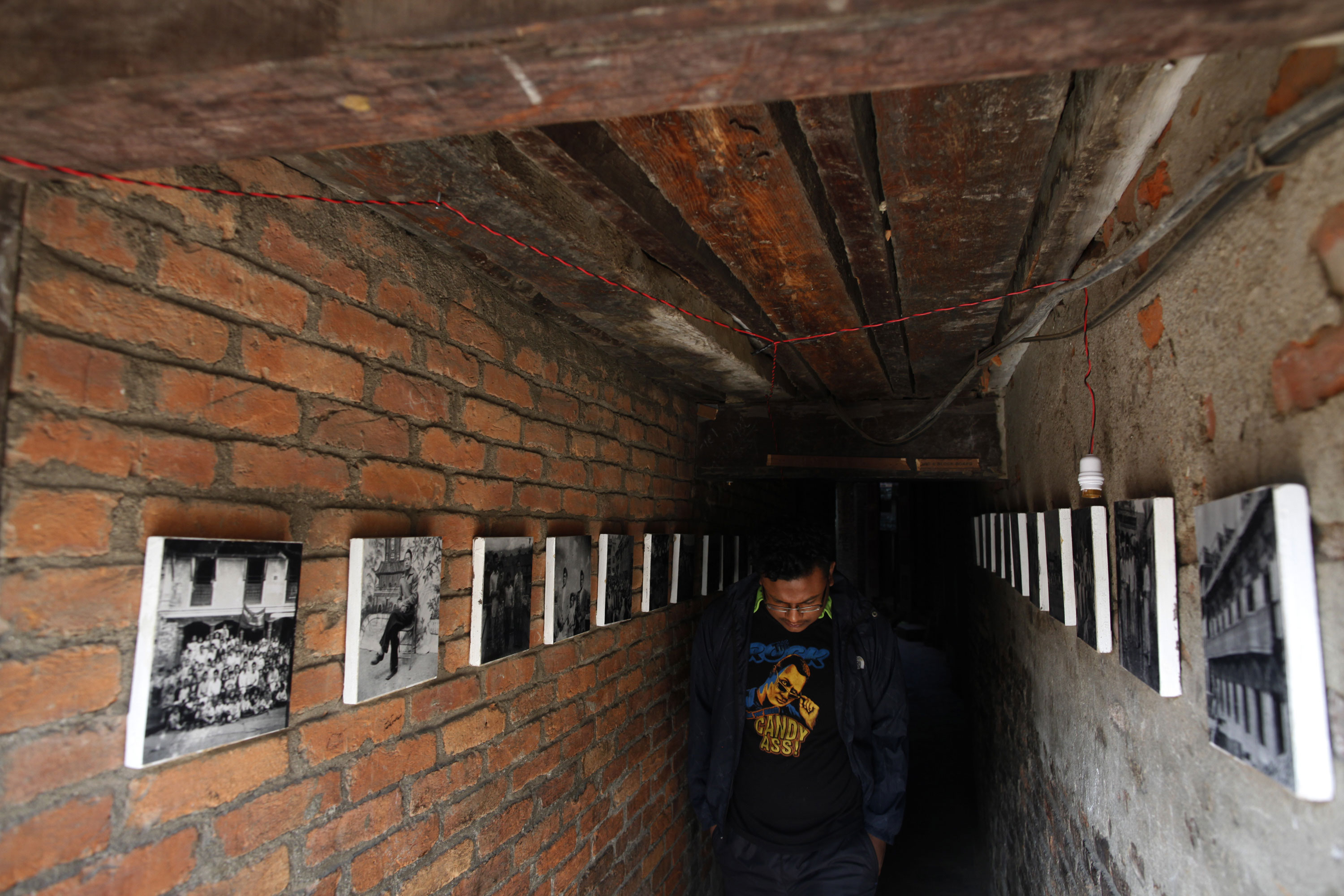 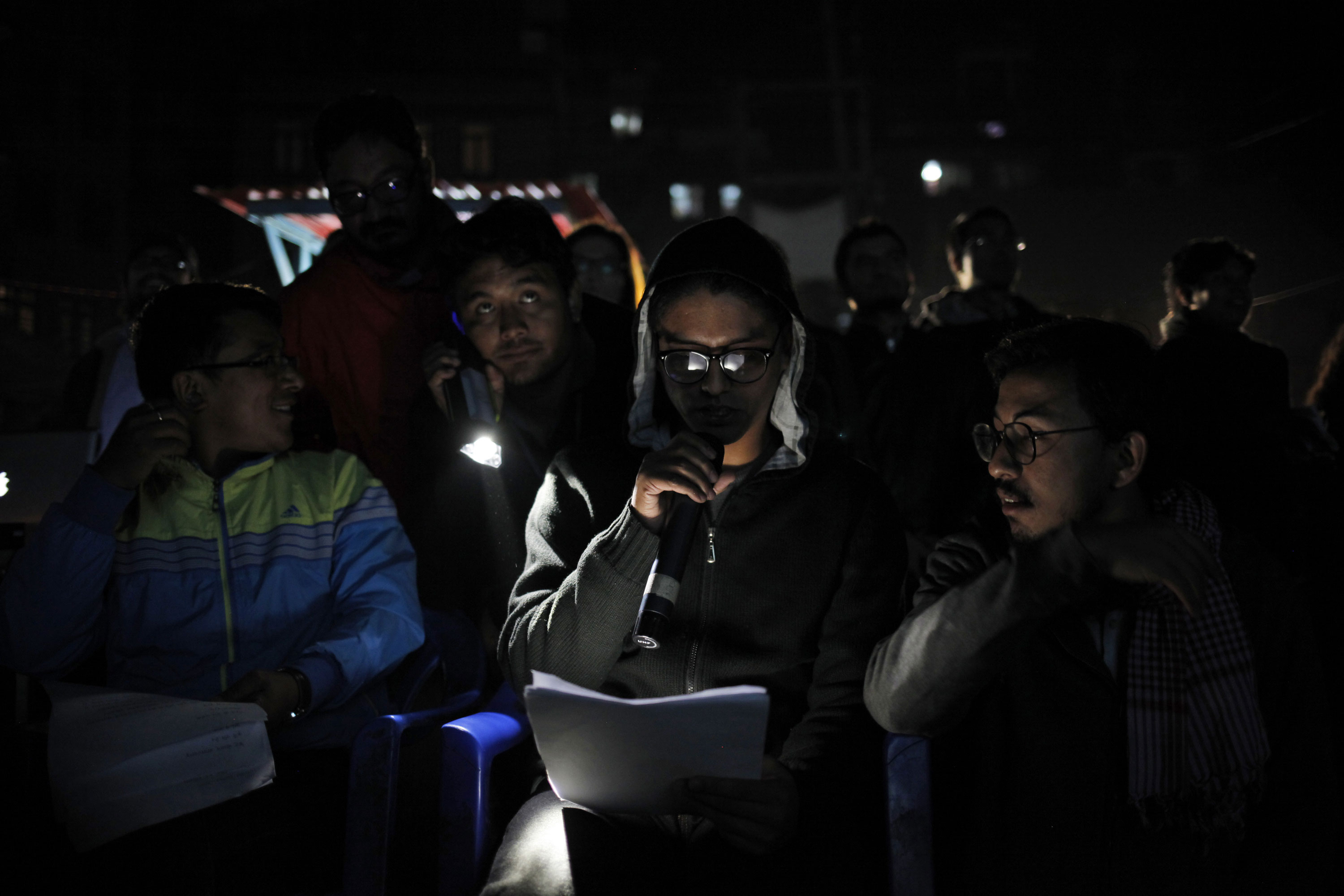 The festival came towards the end of a challenging year for the Nepalese people. [Niranjan Shrestha/Al Jazeera] 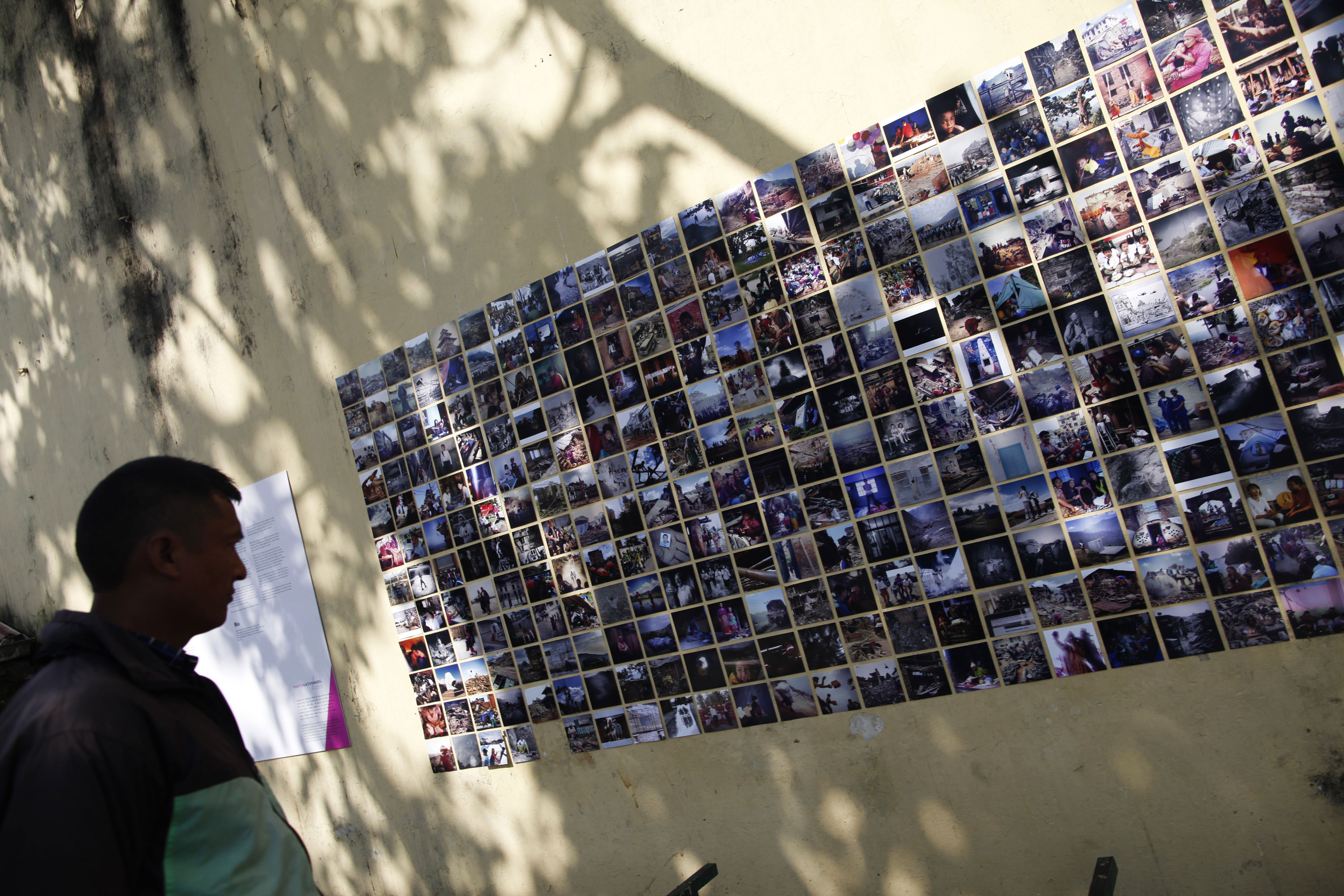 The festival has already contributed $12,000 to help rebuild an old Pati, a traditional rest stop, in a town called Chyasal, which was destroyed in the April 25 earthquake. [Niranjan Shrestha/Al Jazeera] 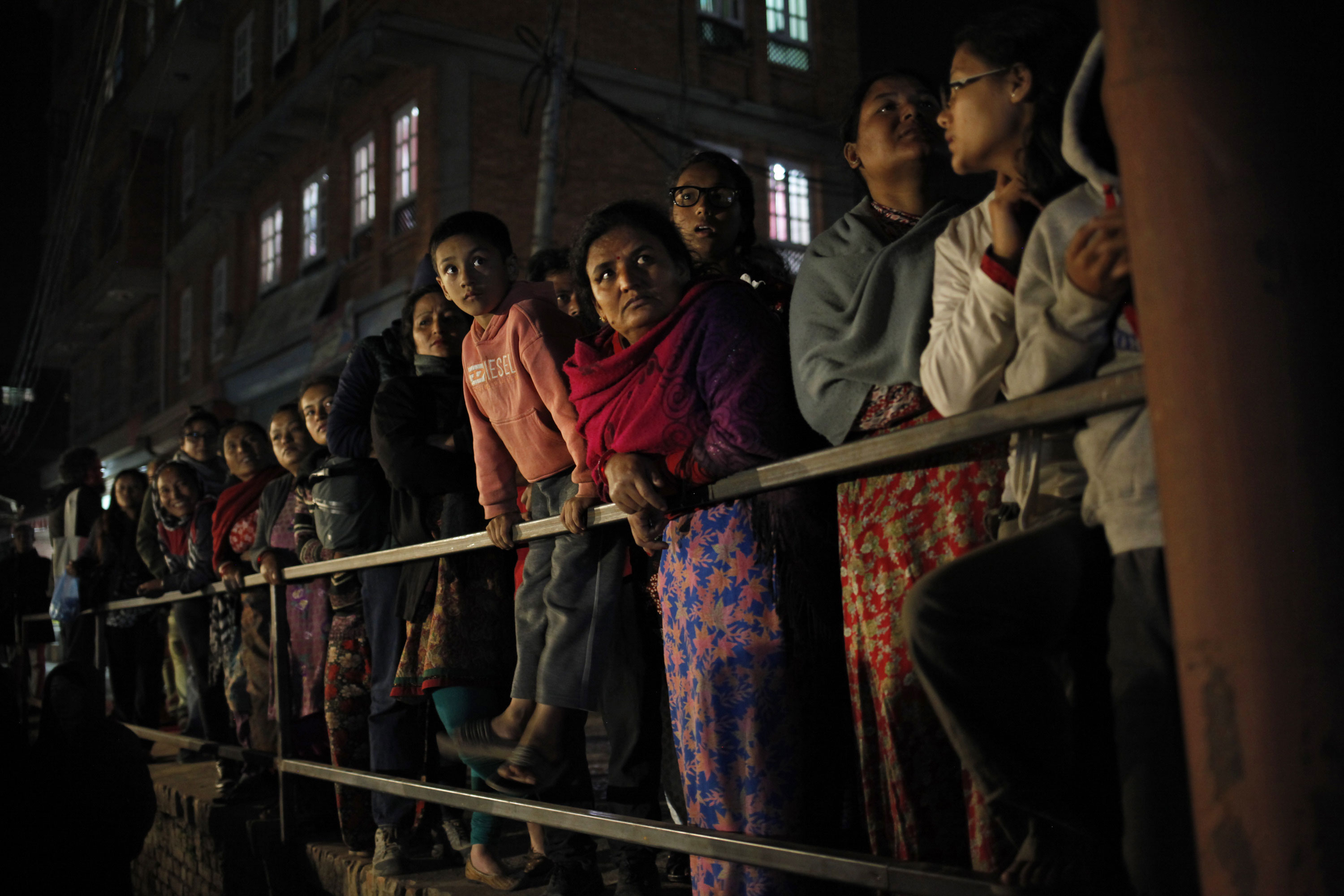 Nepalese people watch the slide show of photos from various artist from around the world. [Niranjan Shrestha/Al Jazeera] 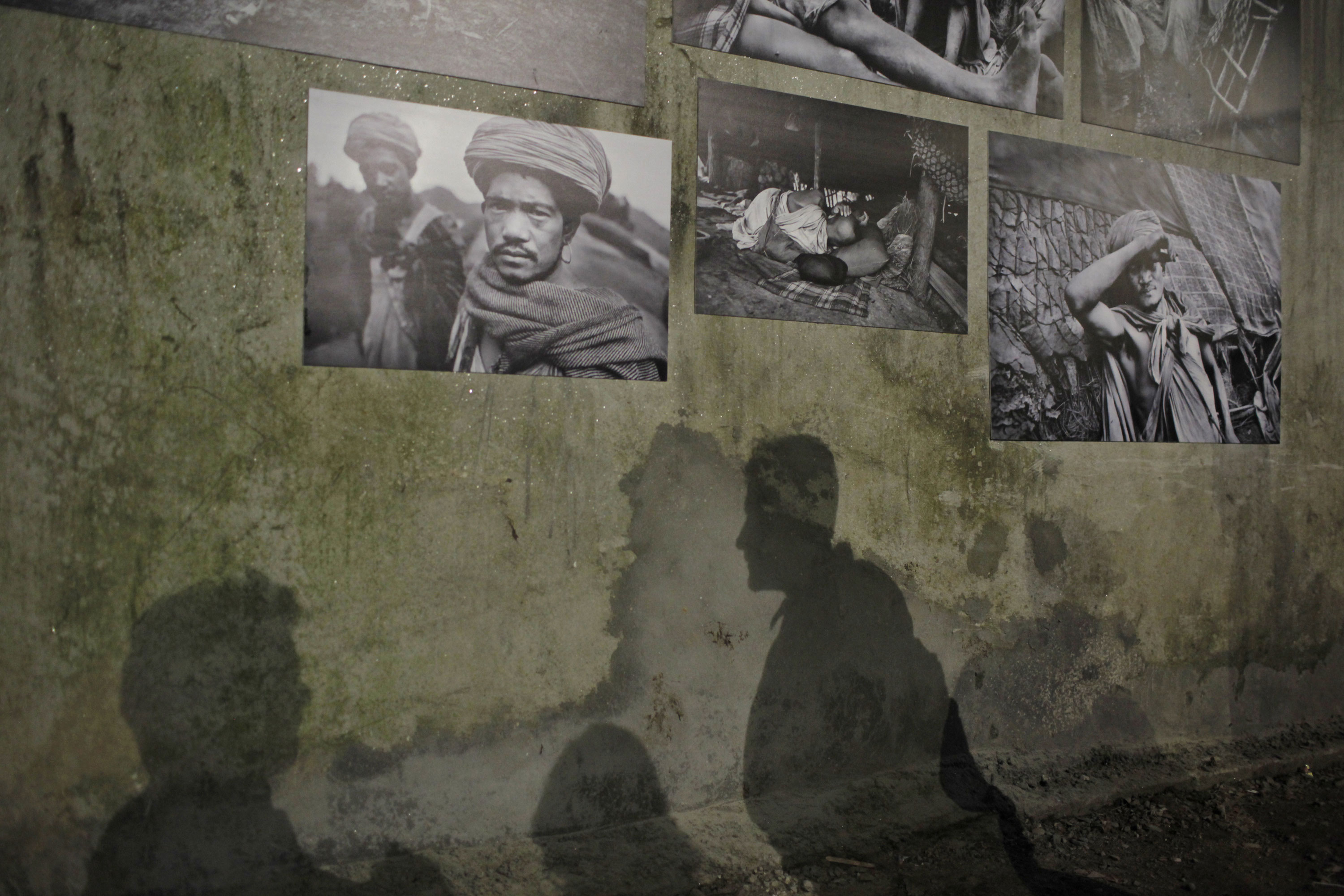 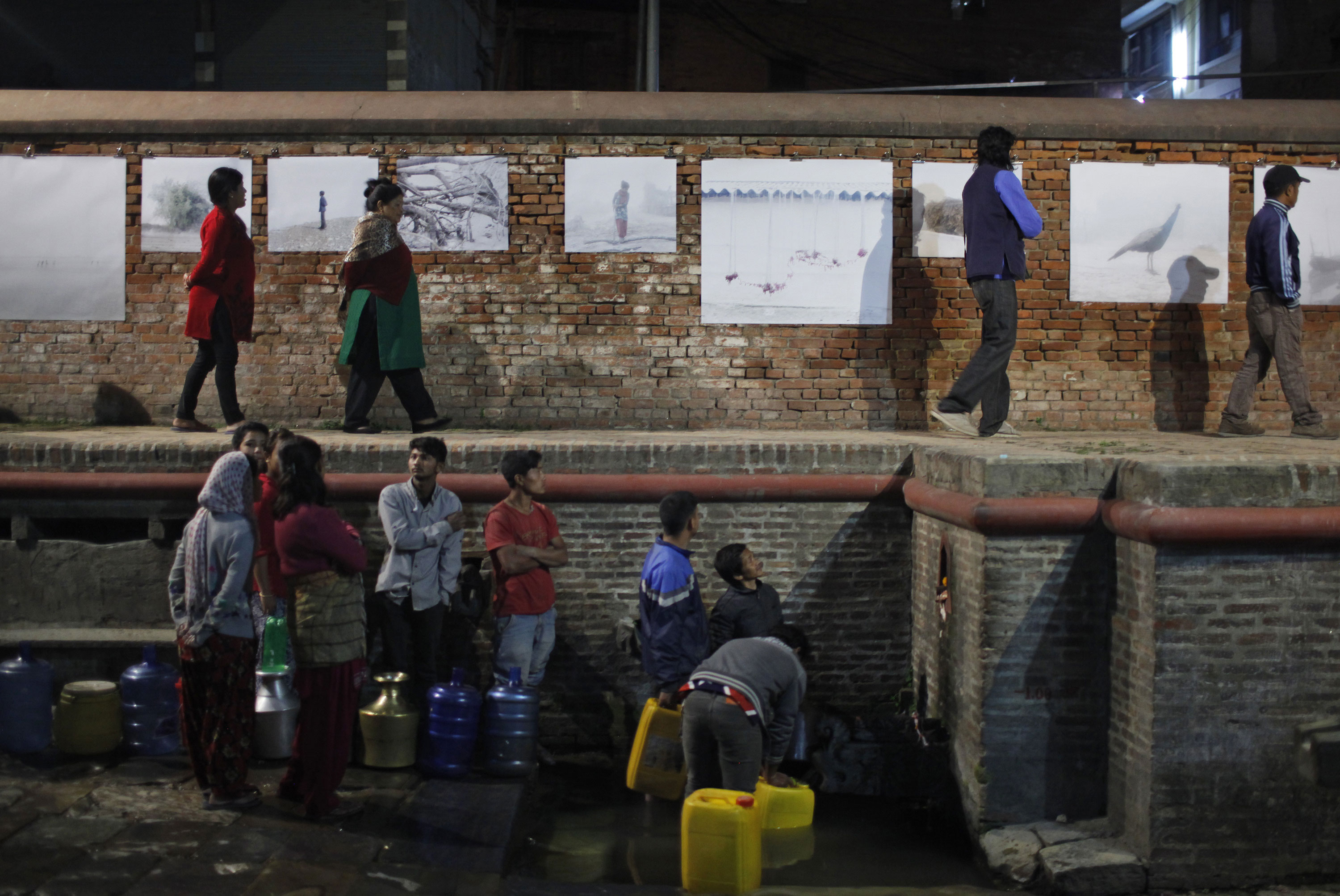 Some people look at the photos as others collect water from a stone spout in Patan Durbar Square, Lalitpur, Nepal. [Niranjan Shrestha/Al Jazeera] 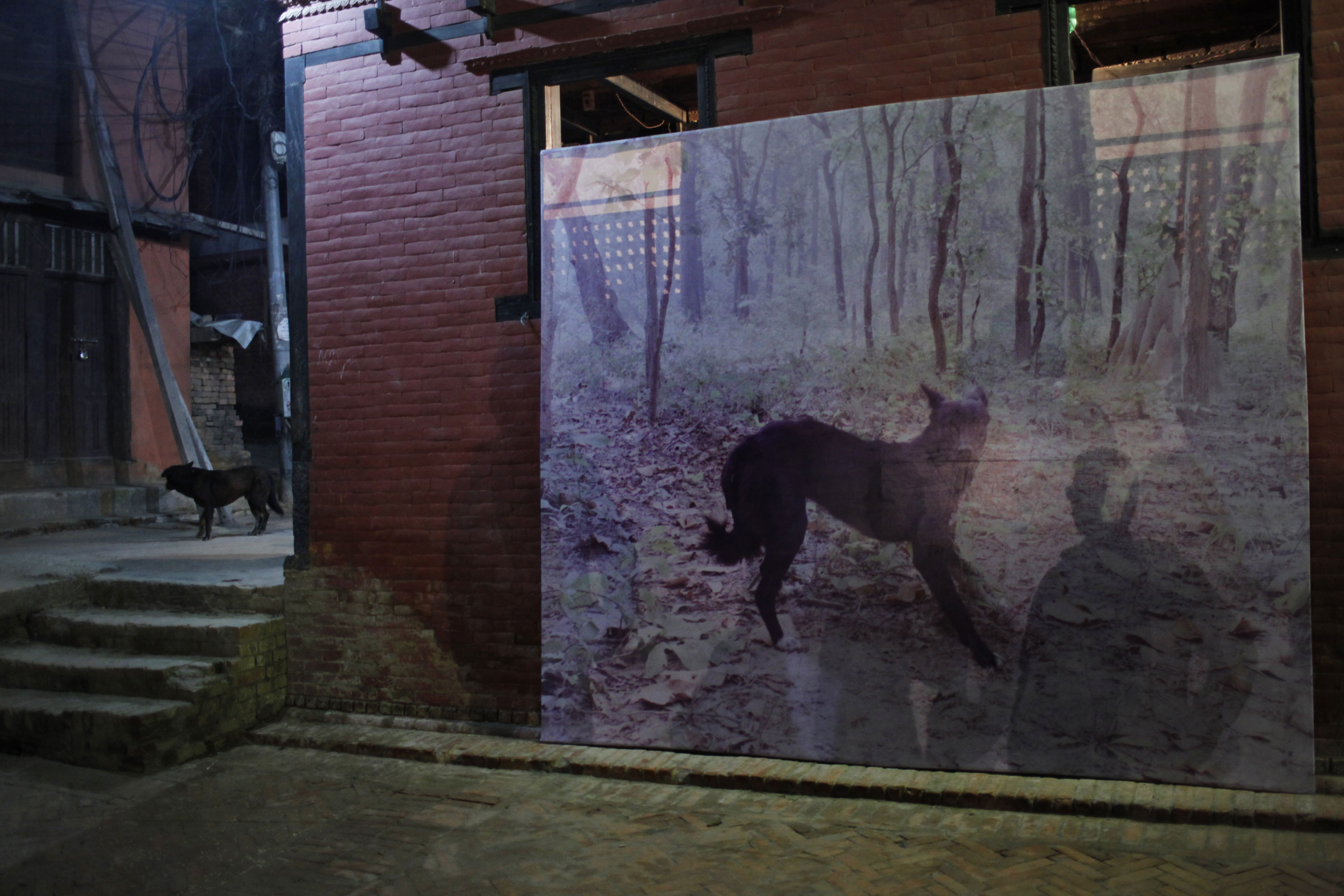 The festival was held in the earthquake-damaged historic city of Patan in Lalitpur. [Niranjan Shrestha/Al Jazeera] 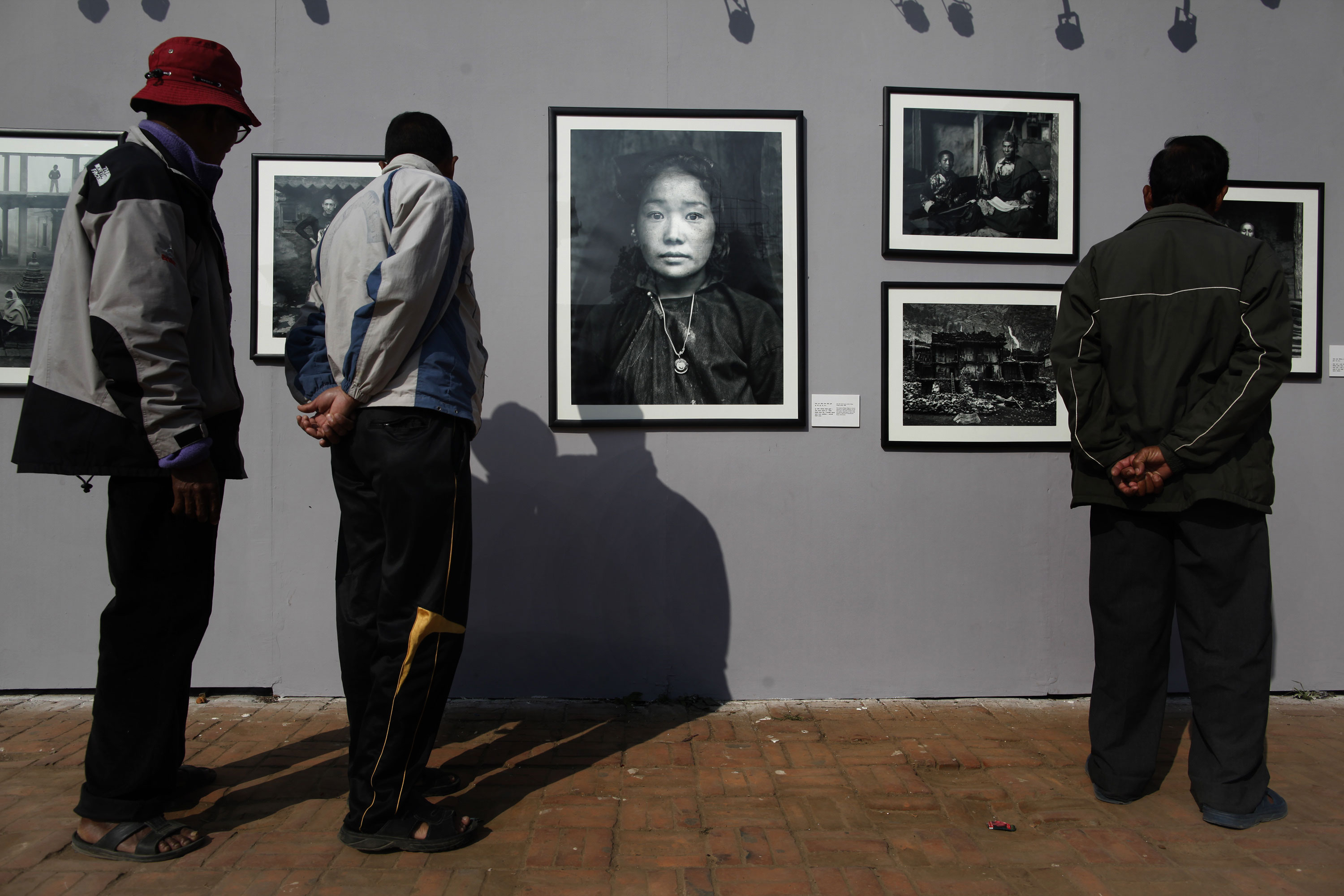